Double Amputee West Climbs Kilimanjaro for a Cause 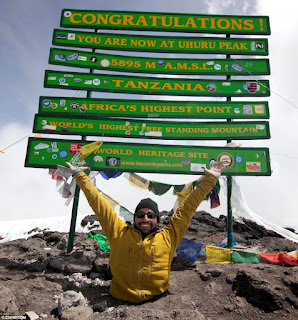 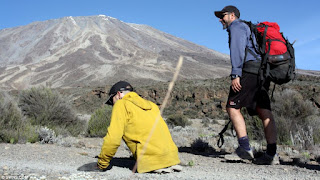 Spencer West, who lost his legs as a toddler when he was diagnosed with Sacral Agenesis, poses for a photo on Friday, May 18, 2012 in Casper, Wyo. The condition made the muscles in his legs useless, and his legs were removed to essentially eliminate "dead weight," as West puts it. West endured bullying in school and stares from strangers, but went on to become a state champion cheerleader at Rock Springs High School and earn his communications degree from Westminster College in Salt Lake City. West is now a motivational speaker, and plans to climb Mount Kilimanjaro to raise money for relief aid for the people of Kenya, who are suffering from the worst drought the country has seen in 60 years. West made a trip to the country years ago, and has been moved to help the area since. (AP Photo/Casper Star-Tribune, Kyle Grantham)


He had come to East Africa in 2008 to help build a school through the charity Free The Children. The trip came at a time when West wasn't happy, in a job that didn't fulfill him.
The children gave West a tour of their school and then settled in the grass outside. They had questions.
Where were his legs?
Did he leave them in the United States?
West was born with a genetic disease that caused his legs not to work. His legs had been amputated when he was a boy, he explained.
A girl raised her hand.
"She looked at me and she said she didn't know that something like this, meaning the loss of my legs, could happen to white people, too," West said.
"That one sentence fundamentally changed the entire course of my life."
The 31-year-old Rock Springs native left his job and moved to Canada, where for the last four years he's worked as a motivational speaker with the organization Me to We. He talks about his life as a way to inspire others to overcome their obstacles.
And in 15 days, West begins his biggest obstacle to date: climbing Mount Kilimanjaro.
Through a campaign built around the climb, "Redefining Possible," West hopes to raise $750,000 to help provide sustainable clean water to more than 18,500 people in East Africa. He wants to help the community that he says changed his life.
The trek takes eight days and 20,000 steps, a trip West will make in his wheelchair and on his hands.
West's legs were malformed at birth from a rare disorder called sacral agenesis.
Right away doctors told parents Tonette and Kenny West of Rock Springs their son's legs wouldn't work.
They predicted his life would be sedentary and encouraged the Wests to gear his interests toward reading and music. Doctors didn't expect West to sit up on his own, walk or be a functioning member of society.
"They'd never really seen this before in this part of the country," West said. "They weren't really sure what to expect."
When West was 2, doctors removed his legs at the knee in the hope he could use artificial legs to get around.
Prosthetics didn't work. At age 5, West's legs were removed just below the pelvis, so he could get around more easily.
Tonette and Kenny raised their son to be independent, just as they raised their daughter, Annie. If something were to happen to them, the Wests wanted their son to be able to take care of himself, Tonette West said.
"I had seen other children who became dependent, and they expected other people to do things for them," she said. "I didn't want that for him. I wanted him to know he could do as much as possible."
For the Wests, it didn't take a lot of coaxing. Their son wanted to do things on his own. They taught him how to dress and take care of himself. He learned to crawl, just like any other child, and taught himself how to get onto a chair or couch by swinging his torso upward.
"If he wanted to get on his skateboard and play, we let him," Tonette West said.
As a kid, Spencer West was happy and outgoing, always with a big smile on his face. He never thought he was different, until he went out in public.
"In the beginning it was really difficult because, I just, I wanted to be seen as a regular kid, right? Not this kid without legs," West said. " . I couldn't understand why people were so curious, because to me it was no big deal. At our home it was our every day."
It hurt to see people whisper and trip over things as they tried to walk and stare at the same time.
In the hallway at school, a student once grabbed the back of West's wheelchair. The kid didn't expect it to happen, but West fell onto the ground, along with all his books.
"He went to help me but he didn't know what to do and so he just ran off," West said. ". It was pretty devastating."
West joined the cheerleading squad at Rock Springs High School, initially as a way to prove to himself he was an athlete. He tumbled, cartwheeled and did handstands. The squad took first in state.
"He made the absolute best of everything," said West's aunt Jamie Krmpotich of Casper.
When asked about his legs, West made jokes as a way for people to see him for who he was. He'd say he left his legs in his other pants, or that a shark bit them clean off.
The boy doctors once said wouldn't sit or walk finished high school in 1999 and continued his studies at Westminster College in Salt Lake City.
He studied communications, graduated and took a job in the corporate world in Phoenix. West had everything he thought he needed to be happy: money, car, a house. But it didn't feel right.
"I really wanted more out of life than just a paycheck and material possessions," West said.
A friend encouraged him to make the trip to Kenya, where he saw poverty for the first time and learned the value of his own story.

"For me, I just thought I was this kid who lost his legs and that was it," West said. ". I think I've been given these challenges and obstacles for a reason to now use them to give back and inspire people to overcome their obstacles. My hope at the end of the day is also to recognize that we all have the ability and the responsibility to lend a helping hand to someone who needs it."


When her son came home, Tonette West noticed everything was different about him. He researched the Free The Children and Me to We organizations, applied for a speaker position and moved to Toronto three months later.
"Happiness was giving back," West said. "Happiness was working for this charity."
West's speeches now take him across Canada and the U.S.
As part of Free The Children's "We Day," he tells his story to 18,000 people, sharing the stage with Dr. Jane Goodall, former Vice President Al Gore, Nobel Peace Prize laureate Elie Wiesel and the Dalai Lama.
For family, it's emotional and overwhelming to see.
"He gets up there and there's Spencer, the little kid we used to play with," said uncle Phillip Krmpotich of Casper. "He's like a rock star."
West has published a memoir, "Standing Tall: My Journey," and leads high school students on volunteer trips to India and Kenya each summer with Free The Children.
Last summer, "I started to see the effects of the largest drought East Africa's seen in over 60 years, and suddenly this community that had helped lift me up and find my passion now was struggling," West said. "I thought, 'I've got to do something about this.'"
In his speeches, West encourages students to raise awareness for the causes they believe in.
"I don't think that's really right of me to continue to tell them to do that when I'd never done anything. I'd never done it myself," West said.
Free The Children founder Craig Kielburger had climbed Mount Kilimanjaro and asked West if he'd ever considered climbing a mountain. He hadn't but thought he might be able to build on that idea. What if he ran a campaign around a climb? He asked his best friends, David Johnson and Alex Meers, to join him. So far, the three have raised $500,000. They've worked with a trainer all year to prepare for June 12, lifting weights, doing pushups, sit-ups and pull-ups. They run 2 miles at a time, West in his wheelchair.
Their guide prepared a route for them on the backside of Kilimanjaro, which will allow them to climb the 19,341 feet a bit slower and adjust to the altitude more gradually, West said. Kenya will be to their backs, and West said they'll be able to turn around on the rough days and remember for whom they're climbing.
A sturdy, light wheelchair with thick tires was built for West. He will wear elbow braces to ease tension when he climbs on his hands. His friends may have to carry him part of the way.
Porters will carry tents and equipment ahead of West and his friends and set up camp. The team will post updates online each day so people can track the journey, and a documentary will be filmed.
The team will have to adjust to changing conditions each day.
"That's the story of his life," Jamie Krmpotich said. "He's extremely adaptable and he improvises very well."
Until a couple months ago, when a friend mentioned it, West hadn't considered he might not reach the top. About 25,000 people attempt to climb Africa's tallest peak annually, but 10,000 don't make it.
West has decided there's a lesson there, too. Sometimes it's not the goal but the journey.
"If we don't try," West said, "then we'll never know."